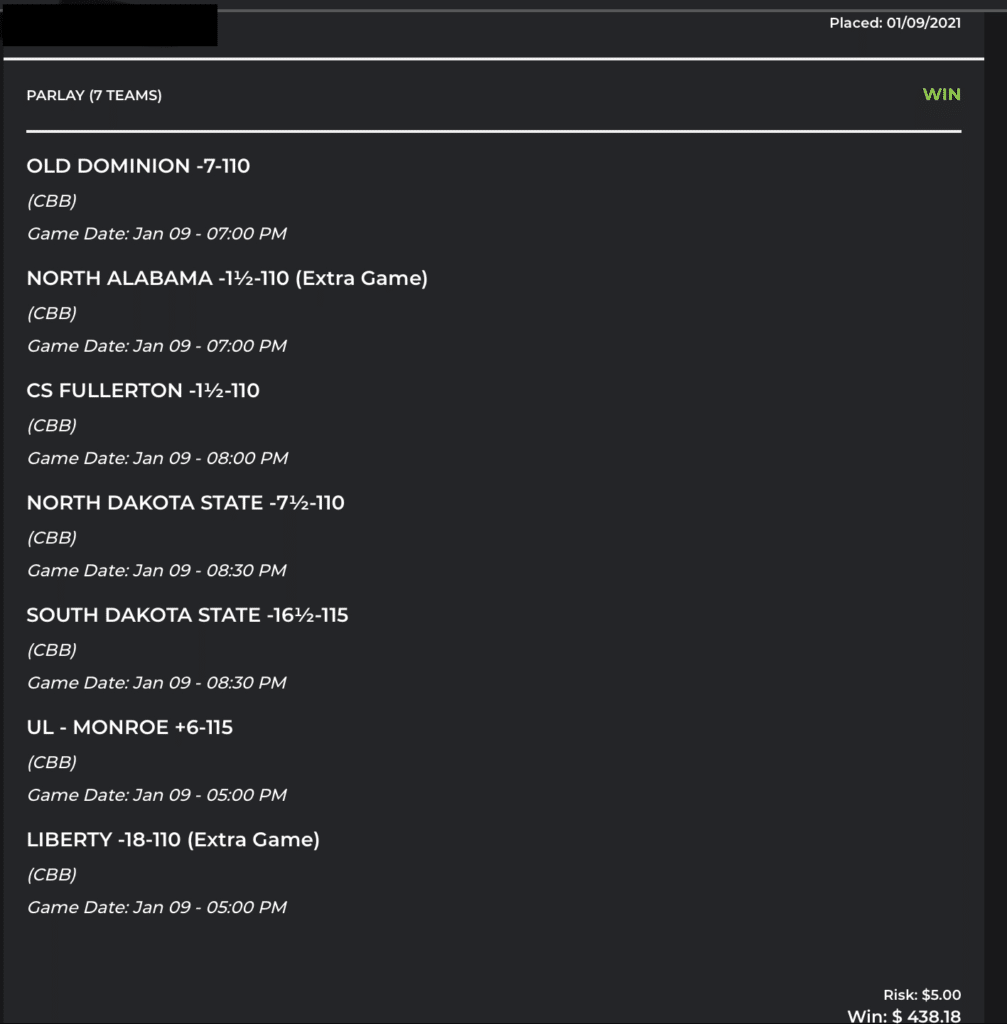 It’s on the record that I hate trends. The last two articles I’ve written here were titled “Trend Busters”, where I looked at trends people have posted on Twitter and attempted to debunk them. The thing that I don’t like about trends is twofold: one is that they often come with small sample sizes and the other is that there is often no apparent reason why the trend should have any predictive merit. If I told you to bet on team X this week because teams with are 5-1 ATS since 1972 coming off of 5 straight games scoring a prime number of points, all against teams whose head coaches all have 7 letter middle names, you would rightfully think I’m insane. However, if we can solve the small sample size problem and establish a legitimate cause-and-effect relationship between what a trend tells us and what we’re using it to bet on, trends can definitely have some value.

This year, several conferences in college basketball are having their teams play back-to-back games against one another on the same court as a way to help prevent the spread of COVID-19. In a perfect world, both ends of the back-to-back would have the same result. But we don’t live in a perfect world. Randomness and coaching adjustments are just two of the things that can make the outcomes of the second leg of a back-to-back differ from those from the first leg. All seven teams from the parlay above were playing on the tail end of a back-to-back. What was it from the first game that clued us in on these teams?

Through January 10, there have been 127 completed back-to-backs. This figure doesn’t include the 14 back-to-backs that had a spread or total push. Here is what the betting outcomes of the first game tell us about which team will cover the second game: 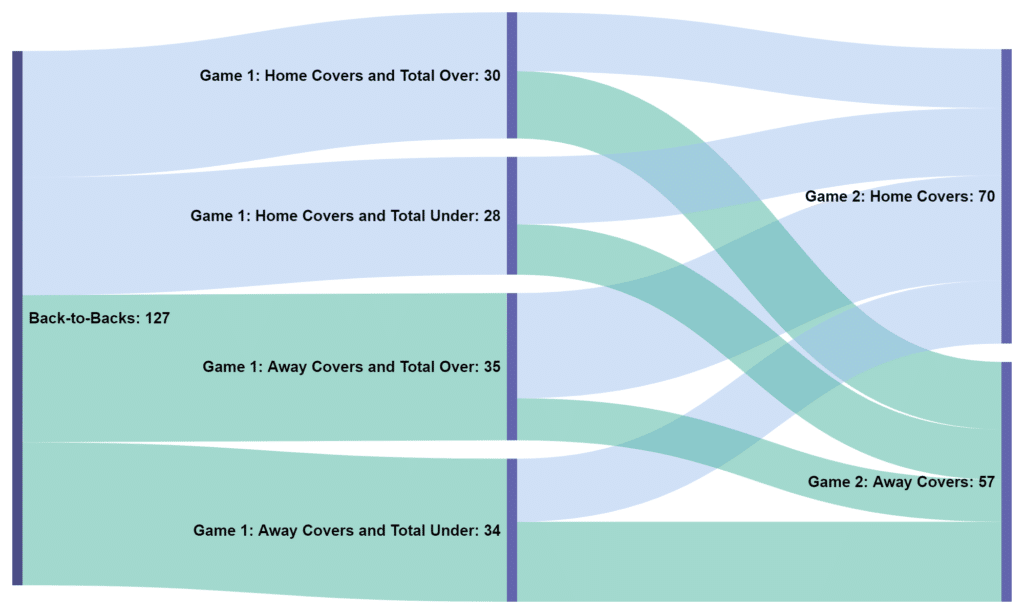 Game Two: Over or Under

The key feature here is the bar for when the first game has the away team covering and total going over. A large majority of the time this happens (25 out of 35), the home team covers the second game. This is what all seven teams from the parlay had in common. They were all home teams who failed to cover a high-scoring first leg of a back-to-back. Personally, I think it makes sense why these teams are covering much more often than not. If the total went over and you failed to cover the spread, you probably played bad defense. The home team has access to all of their data analysis and film study facilities, while the away team doesn’t. This is a likely reason why the home teams are able to make such large improvements in this situation, while we don’t see the same improvement for the away team in the opposite situation.

This has been the most pronounced trend in this data, but there are more when looking at the total for the second game. 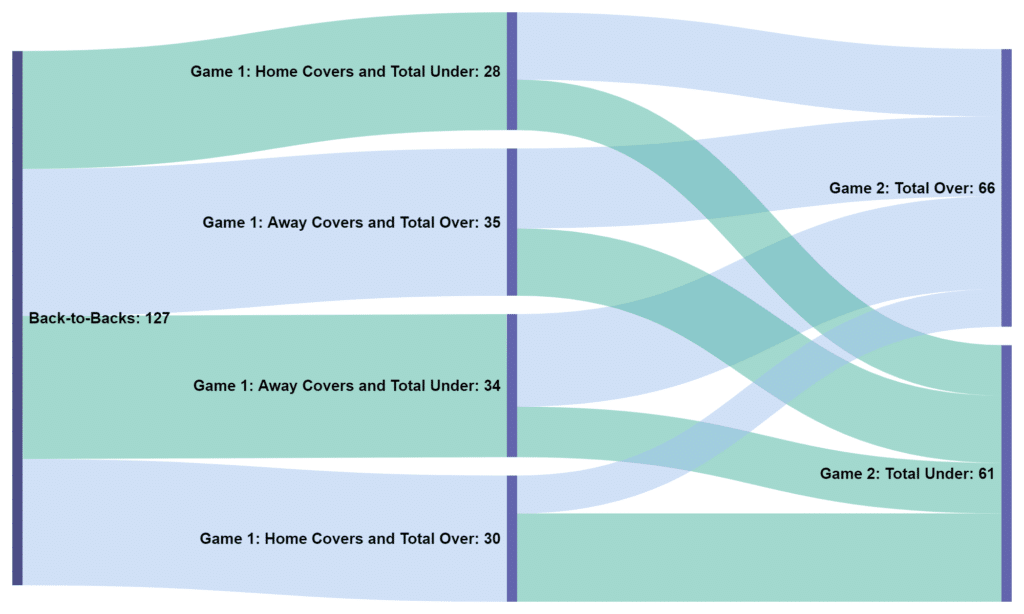 There are two spots that stand out here. One is the fact that 21 out of 30 games have gone under following a home cover and over first game. The other is that 22 out of 34 games have gone over following an away cover and under first game. Neither of these are as impressive as the first one, but they are still worth keeping an eye on. I think they both have cause-and-effect merits as well. If the home team covers and the total goes over, it makes sense for them to slow the tempo to reduce variance in game two. Likewise, if the away team covers and the total goes under, the home team will look to push the pace in game two. Again, the assumption here is that the home team is the one more in control of the adjustments due to access to their facilities.

Only time will tell if these trends are real or if they are just a coincidence. For now though, I’m buying in. I don’t think parlaying seven of them is usually a good idea, but these trends provide good supporting arguments for teams in one of the good spots. Want to bet on a team in one of these spots? If so, head on over to PointsBet using our link or by entering in code CW1500 to receive a free fixed-odds bet up to $500 and a free Pointsbetting bet up to $1000.