Bears vs Rams should be an interesting match-up with the Rams getting 6 points in this spot. The 5-1 Bears head to LA to take on the 4-2 Rams. The Bears have been lead by their defense and I expect them to continue where they left off here. The Rams have beaten the Redskins, Cowboys, Eagles and Giants for their 4 wins. Those teams have a record of 6-19-1 and you have to ask yourself, is a -6 spread at home deserving of this against Bears who are hot? Make sure to check out our new article with projected line moves for week 8.

The model has the game around a median score of 27-20 with the Bears winning outright. The CapWize Model this season has been about .500 on teams to win outright when they are +2 dogs and higher so far this season. And of course, .500 when you get +150 MLs and higher is profitable! Considering the circumstances, the Bears could easily win this game outright tonight.

Cam Akers should see the field and a fair amount of touches tonight as he should be healthy and the notion that Sean McVay is confident in him and going to let him see the field tonight. Sure, it could be coach speak, but with the talent he has, might as well share the touches as Brown and Henderson have had lots of snaps and you want to keep those players healthy for the rest of the season and playoffs. I like for Henderson to go under 53.5 rushing yards at -105 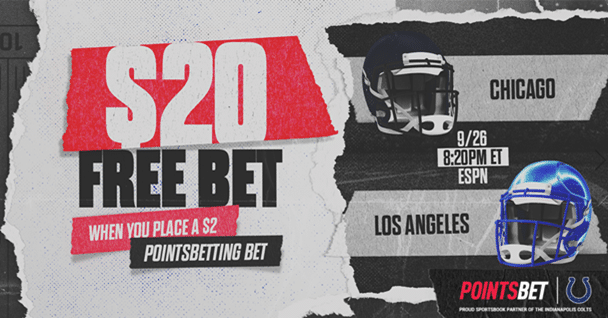 I have to side with the Bears +6 as I think this spread is way off and should be closer to -3. With a line of -6 at home, it is implied a team is getting 2-3 points of homefield advantage and I just don’t see how the Rams are 3 -4 points better than this Bears team. Get a $20 free bet on tonight’s game via PointsBet by signing up here.

What bets do you like for the MNF match-up between the Bears vs Rams?? Join the discussion on our discord channel today.