The Chiefs are one of the favorites to win the Super Bowl this year and look to continue their success after last season. Patrick Mahomes, league MVP of 2018, will look to lead this team to an AFC West Crown and hopefully a Super Bowl berth. Chiefs fell short after losing to the Patriots at home in the AFC Championship.

Ther over/under is set at 10.5 wins, which is tied second for the highest behind the Pats. Chiefs have the 6th toughest schedule, playing the Ravens (home), Colts (home) Bears (away), and Patriots (away). I have them landing at 10 wins this year with a tougher schedule than last year. As far as the odds go to win the division, -155 isn’t a buy considering the Chargers are nearly just as good as the Chiefs, so, therefore, I’ll pass on that.

This is my favorite bet of the West and I like the Chargers to win the division. Melvin Gordon is currently holding out but I am optimistic that the Chargers and Gordon will come to an agreement. Phillip Rivers is getting up there in age but still playing at a high level. The offense should continue to flourish and the defense has improved for the Chargers over the last 2 years, led by Melvin Ingram.

The Chargers have the 16th toughest schedule in the NFL open up against the Colts at home, and also face the Titans (away) and at the Packers (home) in two other notable games. Chargers have the easiest schedule in the AFC West. At +195, you have to take this bet for the Chargers to win the division. I also like the over 9.5 at -140 also and both of these bets have great value. 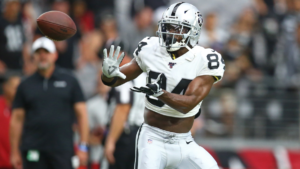 The Antonio Brown saga has been something out of a movie but it looks like AB will be ready to go in week 1 after the helmet drama. The Raiders, of course, are headed to Las Vegas and there is a lot of noise around this team. Raiders went 4-12 last year and this year won’t be much better.

Raiders play on the road at Packers, Vikings, Colts, and Texans. They have the toughest schedule in the NFL this year. It doesn’t help that the Raiders have to face teams like the Chargers and Chiefs twice this year. Their odds are +1100 to win the AFC West and I won’t touch this one with a ten-foot pole. The under 6 wins at -125 seems like a decent bet as I do not see the Raiders winning seven games with the schedule at hand. It will be fun to see AB and Carr in action but the upside with this team as a whole isn’t great.

The Broncos are an interesting team headed into the season as they have a new quarterback behind center and a new head coach. Vic Fangio, defensive coordinator from Chicago, will attempt to turn things around after the Broncos after a disappointing 2018 season. Broncos still have a solid core on the defensive side of the ball with Bradley Chubb, Von Miller, Derek Wolfe, and Chris Harris Jr.

The Broncos have the 2nd toughest schedule in the NFL, behind the Oakland Raiders. They will face Vikings (away), Texans (away), Packers (away), and Browns (home). The thing with this team, is I believe they have the largest gap between their floor and ceiling. I wouldn’t be surprised if the Broncos go 9-7 or 5-11. With Joe Flacco, who has won a Super Bowl in the past, you really don’t know what to expect this year assuming he is fully healthy. They have good pieces on defense and some explosive young players on offense. I have the Broncos going 8-8 this season and hitting the over. Call me a homer but I did predict the Broncos to land under their win total correctly the previous two seasons (make it three in a row correct with over seven wins this season). Sprinkling a little on the Broncos at +1200 as a good value play, and maybe couple that with either the Chargers or Chiefs.