Over the last several years, we have seen several dark horse candidates wind up taking home the coveted MVP trophy in the NFL. Lamar Jackson won it last year at +5500, Mahomes took it home in 2018 with +3300 odds, and if Carson Wentz hadn’t torn his ACL, he would have taken it as a 50:1 favorite in 2017. I want to preface this article by saying that I do believe that one of the top three favorites in Vegas: Patrick Mahomes +400, Lamar Jackson +600, or Russell Wilson +700 will win MVP this year, but hey, you never know! If you need a LEGAL sportsbook to place bets, head to Draftkings Sportbook. Currently, they have the best sportsbook promotion on the market. Grab the Chiefs at +101 points for the 101st anniversary of the NFL, and let’s just say that bet isn’t going to lose.

Trends of past MVP Winners:

– 17 of the last 20 MVPs were quarterbacks, the other 3 being running backs
– A wide receiver has never won the award
– A defensive player hasn’t won the award since 1986
– 9 of the last 10 MVPs’ teams had a first round bye in the playoffs (i.e on a SB contender)

If you combine these into one, we are looking for a former first round pick, a quarterback, and one who can clinch a first round bye for their respective squad. The one interesting aspect this year and I’m going to put it in bold: ONLY THE 1 SEED IN THE PLAYOFFS GETS A FIRST ROUND BYE THIS YEAR. THE NFL ADDED ANOTHER PLAYOFF TEAM TO MAKE IT SEVEN IN EACH CONFERENCE. Because of that, I’m throwing out the ‘must have a first round bye’ trend and replacing it with, just a team that makes the playoffs. The one takeaway from all of these trends is that there’s really no point in betting on a running back for MVP, as it would take either a 2,000+ yard rushing or a 27+ TD season to have a shot at the award. In a pass-happy league like the NFL is today…just bet on a quarterback for MVP. Like I mentioned earlier, it’s hard for me to see anyone outside of the top three Vegas favorites winning MVP this year, but recent history has shown that long shots deserve some love too. So, let’s jump right in and take a look at some MVP long shots for the 2020 NFL season. Disclaimer: Only players with odds +3000 or higher as we are searching for longshots & value on the board. 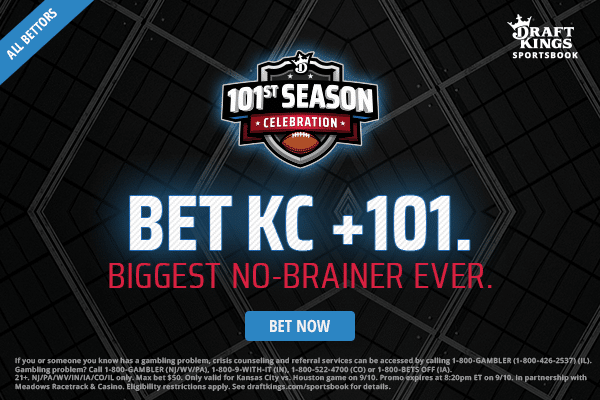 Throughout his career, Matthew Stafford has always been criminally underrated due to one simple fact: He plays for the Detroit Lions. Last year, Stafford’s streak of 136 consecutive starts was snapped after it was discovered that he had multiple broken bones in his back. Stafford missed the rest of the season and not surprisingly, Detroit went 0-8 without him under center. The MVP case for Matthew Stafford is pretty simple…he puts up numbers. Before getting hurt last year, Stafford was having his best season to date, posting a 65% completion percentage, 2,499 yards, 19 TDs to just 5 INTs. If you stretch that out over a 16 game season, he’s putting up 5,000 yards, 38 TDs, and 10 INTs.

The reason he comes in with 40:1 MVP odds is because, not shockingly, Vegas projects the Lions to finish dead last in the NFC North at 6.5 wins. Add in the fact that Vegas also has Matt Patricia as the favorite for ‘First coach fired’, and Stafford’s odds make all too much sense. However, every single year in the NFL we have a “How the hell did those guys win 10+ games?” team. Last year it was San Francisco, in 2018 the Bears went 12-4, in 2017 McVay revolutionized the Rams, and in 2016 the Cowboys won the NFC East with a 4th round rookie QB.

I think the Lions have a solid chance to follow in those same footsteps in 2020. They have two excellent receivers in Marvin Jones Jr. and Kenny Golladay, an above average offensive line, and their defense should be much improved with the additions of Jamie Collins, Danny Shelton, and Jeff Okudah. No, I don’t believe in Matt Patricia as a head coach, but the NFC North is up for grabs this year. I know saying it out loud sounds ludicrous, but if the Lions finished 10-6 or 11-5, Stafford would have to be be in the MVP conversation.

Can you guess which team had the most money on them to win the Super Bowl in Vegas last year? That’s right, the Brownies! Cleveland rewarded their bettors last year with a 6-10 season, the cherry on top being a week 17 loss to the 1-14 Bengals. It became clear early on that head coach Freddie Kitchens was in way over his head and he was fired after just one season. Cleveland handed the reigns over to former Vikings OC Kevin Stefanski and I must say, I love the hire. In his first full season as offensive coordinator in Minnesota, the Vikings were 6th in RYds/G, 8th in PPG, and 10th in offensive DVOA, all without Adam Thielen for half the year.

The 2019 Browns were one of the most disappointing teams of the last 20 years and all fingers seemed to point at Baker. Mayfield threw for just 3,800 yards and he was 2nd in interceptions behind only Jameis Winston. It wasn’t entirely his fault however, as the offensive line was atrocious and the defense didn’t do him any favors either. The Browns made a point this offseason to improve Mayfield’s protection and beef up their O-Line with the additions of Jack Conklin and Jedrick Wills Jr. out of Alabama.

Baker is my favorite long shot MVP bet this year for three reasons. 1) I believe in Stefanski’s offense and play calling abilities. 2) They improved the offensive line immensely 3) With all the talent on this team, they should win 10+ games. I love Baker and the Browns this year.

Do I think Josh Allen is a good NFL quarterback? Hell no. But do I think he could win the MVP in 2020? Hell yes. Former first rounder, Josh Allen led the Bills to the playoffs last year in just his second season, but ‘led’ is a pretty strong word. Buffalo’s defense was overshadowed last year by San Francisco’s and New England’s, but they surrendered just 16.2 PPG in 2019, which is the 10th fewest over the last decade.

Josh Allen was atrocious in his rookie year, but improved leaps and bounds in his sophomore season, passing for 3,089 yards and 20 TDs. As we all know, Allen isn’t the best pocket passer, but where he truly excels is in the run game. Only Kyler Murray and Lamar Jackson had more rushing yards than him last season and Allen led all quarterbacks with 9 rushing TDs in 2019. It’s no secret that Josh Allen really struggles with the deep ball, as his accuracy on throws 21 yards or more was an abysmal 33% last year. Only Mason Rudolph, Kyle Allen, and Joe Flacco had worse percentages on such throws.

The reason I like Allen as a sleeper MVP candidate is because this Buffalo team has a chance to grab a top seed in the AFC. They added Stefon Diggs to help stretch the field, they’re going to have a top tier defense once again, and the AFC East is terrible. I think this team can win 11 or 12 games and possibly if Allen can improve upon a solid 2019 season, he can turn into sort of a ‘Cam Newton Lite’ because of his rushing upside.

I looked over every single player’s MVP odds on DraftKings and the one number that kept jumping out to me was Jared Goff at 80:1. No, I don’t think Goff is winning the MVP this year, but +8000 is just too high. Daniel Jones, Drew Lock, and Jarrett Stidham ALL have better odds to win MVP this year, which is just asinine.

This bet is strictly a numbers play, but let’s make the case for Goff to win MVP. Over the last three years, Jared Goff has a 33-14 record as a starter, he’s averaged 29 TDs a season, and he led the Rams to a Super Bowl. Even last year, Los Angeles had ‘a down year’ and the team still went 9-7, while Goff threw for nearly 4,700 yards. Yes, they lost Todd Gurley, Brandin Cooks, and Dante Fowler. Yes their offensive line was one of the worst in football last year. And yes, they play in the toughest division in the NFL. However, Sean McVay is still their head coach. If I had to pick one coach to start an NFL franchise with, I’m taking McVay every single time.

Vegas has the Rams pegged for an 8-8 season this year and most fans agree that NFC West now belongs to San Francisco and Seattle. It is a long shot, but if the Rams can revert back to their winning ways and Goff throws for 4,800 yards on good efficiency, he’s definitely in the discussion. If you put $25 down on Goff, you win $2k, it’s definitely worth a shot in the dark.

Who’s your longshot pick? Join the discussion on our discord channel today.